WWW Helps to Bring Sunburst Youth Academy to the IE

Posted at 13:00h in Uncategorized by Charlemagne

RIVERSIDE – Sunburst Youth ChalleNGe Academy, an Orange County-based residential and quasi-military program for at-risk youth, is set to host an orientation in the Inland Empire on Saturday, December 12, 2015 from 11:00 a.m. to 1:00 p.m. at California Baptist University.  The orientation, which will be the first of its kind to take place in the Inland Empire, will cover the history and background of Sunburst, the application process, and what to expect if accepted into the residential Academy, which is located at the Joint Force Training Base in Los Alamitos.  The orientation and program is geared for California students ages 16-18, who are free of felonies, and are at-risk of dropping out of high school or credit deficient.  The orientation is open to the public, students interested in applying, parents and families, and community members working with youth at-risk for dropping out of high school or credit deficient.

The Sunburst Youth ChalleNGe Academy, as part of the National Guard Youth Challenge Program, is operated through a Cooperative Agreement between the National Guard Bureau and the State of California.  The Academy is a residential program that incorporates a highly structured quasi-military format emphasizing self discipline, personal responsibility, and positive motivation. Students, who are referred to as cadets while at the Academy, must meet military grooming standards, wear military type uniforms, and observe standard military customs and courtesies. Each class involves a 3-phase program that begins with a two week Acclimation phase where the goal is to identify those students that have the desire and discipline to complete the program. Students who successfully complete the Acclimation phase enter the 20-week Challenge phase where the emphasis is on the “Eight Core Component” curriculum. Cadets must show improvement in each component.

According to Riverside District Attorney Crime Prevention Unit Supervising District Attorney Gerry Lopez, “Today’s unrehabilitated juvenile delinquent or at-risk youth is tomorrow’s adult criminal if there is no proper or effective intervention. Unfortunately, many of our local families encounter great difficulty finding effective and low cost resources for helping their children struggling with behavioral and academic issues. The Riverside County District Attorney’s Office and our community partners are collaborating with the California National Guard to bring the Sunburst Youth Academy orientations and recruitment efforts to the Inland Empire. This collaboration will serve to help local families discover and participate in one of the most effective and successful juvenile interventions programs in the entire state. This partnership will greatly promote our efforts to help local youth overcome personal challenges, achieve academic and social success, and become the great leaders of tomorrow.”

Sunburst has a mission to intervene and reclaim the lives of 16 to 18 year old high school drop outs; to produce program graduates with the values, life skills, education & self discipline to succeed as productive citizens.  Sunburst reported success rates including that approximately 75% of Academy graduates earned their high school diploma, GED, or return to high school. Additionally they report on average, 34% of Academy graduates pursue a higher education, 6% of graduates join the military, and 47% join the workforce. As of February 2011, more than 100,000 students have graduated the program.

According to the California Attorney General’s 2015 Report on California Elementary School Truancy & Absenteeism Crisis, during the 2014-15 academic school year, Riverside County had a 25.06% Elementary School Truancy Rate, equating to a loss of $96,833,125.00 to Riverside County.  Riverside County’s high school dropout rate in 2014 was reported at 9.4%.  The California Attorney General Kamala Harris reported in her office’s 2014 Report on California Elementary School Truancy & Absenteeism Crisis that 82% of prisoners in America are high school dropouts.  Research shows that when students are chronically absent, they fall behind academically, they are less likely to graduate from high school, and they are more likely to be unemployed, on public assistance, or victims or perpetrators of crime.

Debra Postil, Co-Founder and Executive Director of Women Wonder Writers (WWW) commented, “Community partners like CBU and the DA’s Office are instrumental in the successful implementation of intervention programs for at-risk youth in the IE.  We often see transportation as an issue for our youth and their families in the Inland Empire, so bringing the initial orientation and first phase of the program to a local site will help remove that barrier for youth who are serious about challenging themselves to get back on track.  We’re excited to support this collaboration with Sunburst.”  CBU Associate Professor Marilyn Moore stated, “The Sociology Undergraduate Program is looking forward to supporting the Sunburst Youth Academy as they begin to use CBU as a recruitment site reaching out to high school students in need.  We recognize it is another important step in reducing the truancy and dropout rate here in the Inland Empire and giving at-risk young people a path to a brighter future.   These collaborative efforts are extremely important and we will continue to look for any opportunity to improve our community.”

The Orientation for Sunburst Youth ChalleNGe Academy will take place Saturday, December 12, 2015 from 11:00 a.m. to 1:00 p.m. at California Baptist University, located at 8432 Magnolia Avenue, Riverside, California 92504.  Signs will be posted saying “Sunburst Orientation,” to guide attendees.  Sunburst will be providing and accepting applications for both young men and women who are California residents ages 16-18, who are free of felonies, and are at-risk of dropping out of high school or credit deficient.  More information about Sunburst can be found at www.theburst.org or by contacting Sgt. Cotton atcotton.sya@gmail.com or call (562) 936-1752. 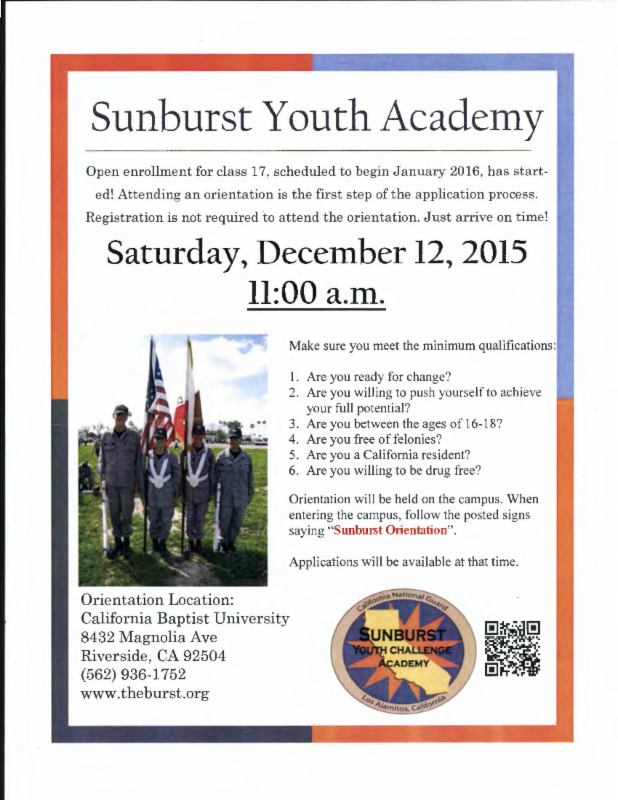